Fellows will Gather at Native Filmmakers Lab on May 12-17, 2019 in Santa Fe, New Mexico

The Lab will take place May 12-17 in Santa Fe, New Mexico. During the Lab, Fellows work with a cast and crew to shoot workshop versions of scenes from their short films under the expert creative mentorship of Indigenous Program alumni and other established filmmaking professionals serving as Advisors along with the Sundance Indigenous Program staff, led by Bird Runningwater. The Lab encourages Fellows to hone their storytelling and technical skills in a hands-on and supportive environment. Following the Lab, they will receive targeted support from supervising producers, grants to fund the production of their short films, and will attend the annual Native Forum at the 2020 Sundance Film Festival for ongoing support on their projects.

“The Native Filmmakers Lab is one of Sundance Institute’s most important annual programs for emerging Indigenous storytellers, offering them a unique and supportive space for collaboration and learning from accomplished Program alumni and Creative Advisors,” said N. Bird Runningwater (Cheyenne/Mescalero Apache). “Sundance Institute’s history of supporting talented Indigenous artists continues as we invite Kyle and Peshawn to carry out the creative process that will bring their projects to worldwide and appreciative audiences.”

“Alumni of the Native Filmmakers Lab have gone on to screen their short films at film festivals worldwide, including the Sundance Film Festival, and have advanced to attend top graduate film programs in the U.S. to further their craft,” said Runningwater. “Our labs also have served as a launching pad to begin the journey into writing and developing feature films.”

The filmmakers serving as Creative Advisors for this year’s Native Lab include: Sally Riley (Wiradjuri Nation) (Confessions of a Headhunter, Redfern Now) , Jennifer Reader (A Million Miles Away, Signature Move) , Gregory Nava (El Norte, My Family/Mi Familia, Frida), Shaandiin Tome (Diné)  (Mud – Hastl’ishnii, Deb Haaland – “Why not me? Why not now?”) and Shaz Bennett (Queen Sugar, Alaska Is a Drag). Peer Advisors for this year’s Native Lab include Shane McSauby (Grand Traverse Band of Ottawa and Chippewa Indians) (Mino Bimaadiziwin) and Erin Lau (Kanaka Maoili) (The Moon and the Night). Both are Native Lab alumni (McSauby, 2016 and Lau, 2017).

Artists and projects selected for the 2019 Native Filmmakers Lab:

A young boy gets an opportunity to play college basketball, forcing him to make a tough choice of leaving behind his family and traditional upbringing.

Kyle Bell (Creek-Thlopthlocco Tribal Town) is an Emmy award-winning filmmaker from Tulsa, Oklahoma. Since his filmmaking career began in 2015, Kyle has won numerous awards for his documentary and cinematography work. Kyle’s work has premiered online as a Vimeo Staff Pick and, most recently, his short film Defend the Sacred, covering the Standing Rock movement, won the audience award at the 2017 Seattle International Film Festival.

The Daily Life of Mistress Red

Peshawn Bread is a screenwriter, poet, and cinematographer from the Penneducah (sugar eater) and Yappaducah (root eater) bands of the Comanche tribe. Her writing capitalizes Indigenous women, sexuality and humorous experiences. In the winter of 2015, she was introduced and welcomed as one of Sundance Institute’s Full Circle Fellows. She was a 2015-16 recipient of the 4th World-Indigenous Media Lab Fellowship supported by SIFF (Seattle International Film Festival) in partnership with Longhouse Media, Sundance Institute and ITVS. Peshawn also participated in a Screenwriter’s “Designed Obstacles” workshop led by Joan Tewksbury (Thieves Like Us, Nashville). Throughout the years she has worked on many sets, including Drunktown’s Finest (2014) and Mud (Hashtl’ishnii) (2017). She currently resides in San Francisco where she is a fourth-year student at the Academy of Art University.

The Full Circle Fellowship Program develops and supports 18-24 year-old Indigenous storytellers and is part of the Institute’s year-round offerings for Indigenous artists at all stages in their careers. In addition to participating at this month’s Native Filmmakers Lab, the Full Circle Fellows will be mentored throughout the year by esteemed independent filmmakers and Creative Advisors and will attend the 2020 Sundance Film Festival.

Born in Albuquerque and raised in Seattle, Xyst’s projects explore ideas of community, existential dissonance and internal turmoil. Believing in the power of cinema to bring light to unexplored contemporary issues, his films necessarily reflect social and political themes in their bedrock, if not explicitly. Having made shorts in one form or another since early childhood, Xyst’s work dives head first into playing with the structural elements of cinema in story, technology and emotion. In the filmmaking program at his alma mater high school, Xyst’s projects have screened across the United States, receiving honors throughout and distribution on internet channels and television. He currently studies film production at the University of New Mexico.

Lejend Yazzie studies film production with a focus on directing at Arizona State University (ASU). She is an activist, filmmaker, writer and artist who utilizes art and film as forms of activism an expression. Yazzie has written for her school’s Native college magazine, Turning Points, outlining her experiences as an Indigenous college student and filmmaker. As a freshman and sophomore, she interned at the Indigeneity session at ASU’s Human Rights Film Festival.

Jolene Patterson is a photographer from Upstate New York, and comes from a large family of artists who promote their Oneida culture and heritage. Jolene’s biggest influence was her grandmother, the late Maisie Shenandoah, a Wolf Clan Mother for the Oneida people who spent her life fighting for Indigenous people. Following in her footsteps and carrying her grandmother’s name, Jolene attended the United Nations forum for Indigenous peoples and spoke on behalf of Indigenous youth. Through her life’s work, she plans to bring awareness about Indigenous oppression yet carry all the beauty and knowledge to share with the world. Jolene had a talent for photography so she decided to use this medium to start her path of shedding light on Indigenous people.

Oneida Indian Nation Representative and Nation Enterprises CEO Ray Halbritter said, “Congratulations to Oneida Indian Nation Member Jolene Patterson and the other talented emerging Native filmmakers for being selected to receive this extraordinary opportunity. We are  thrilled that our collaboration with Sundance Institute has created yet another way in which our younger generation of Native youth can pursue their dreams and share our rich stories far and wide.” 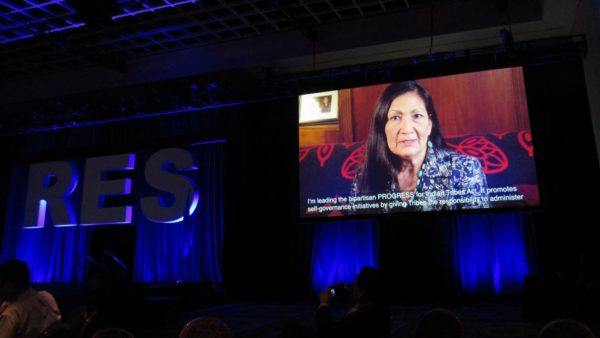