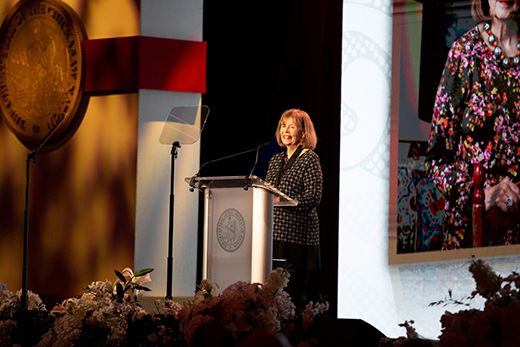 Brenda Kingery speaks at the 2019 Chickasaw Hall of Fame Banquet.

Chickasaw Hall of Fame member Brenda Kingery’s epiphany – that powerful works of art can preserve culture – came to her decades ago as she embarked upon an artistic career of critical acclaim. 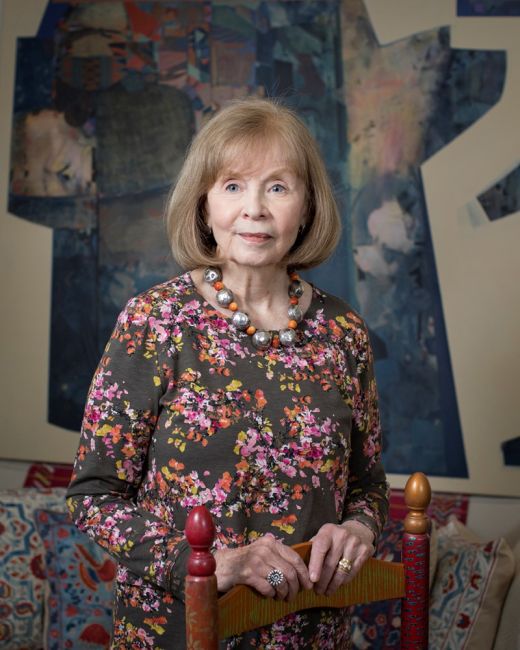 Kingery founded Threads of Blessing International – an organization empowering women around the world to hone artistic talents that reflect their own cultural heritage.

“A mission trip to Honduras 23 years ago was the beginning of a lifelong commitment and adventure,” Kingery said in her Chickasaw Hall of Fame acceptance speech in April. “Threads of Blessing began with Honduran women in a small village outside of San Pedro Sula.”

Threads of Blessing hosts needlework workshops for women in Haiti, Honduras and Uganda, teaching them to channel their own cultures to make a living for themselves and their families.

“The women are asked to visually record, through embroidered designs, their own indigenous stories and their own original designs,” Kingery said.

“The Okinawans have been occupied by several foreign countries throughout the last 600 years. What I’ve learned is that the Okinawans were able to keep their culture by visually recording their stories,” Kingery said. “They are famous in the Far East for their dance, their textiles, ceramics and music. The benefit of this is that their children carry pride in their culture.”

According to the Threads of Blessing website, the finished tapestries are sold by Threads of Blessing in the United States and Canada as products such as pillows, bags, journals, book covers and other items, and 100% of the proceeds go to the artists who made the products.

“These women, through the sale of their embroidered textiles, have found opportunity,” Kingery said. “They can now pay on an automobile. They can educate their children. They can buy seeds for crops to feed their families. They are learning good business process.”

From the Chickasaw Nation, her studies in Japan and her work with Threads of Blessing, Kingery said she fully understands how art is essential to preserving cultural heritage.

“I am thankful to the Chickasaw Nation and those before us who have taught us the importance of learning our language, our history and our culture,” Kingery said.

“Her dedication to helping others is inspiring,” he said during the 2019 Chickasaw Hall of Fame induction ceremony for Kingery and four others. “As a founding member of Threads of Blessing, she has touched lives in Honduras, Uganda and Haiti. We honor Brenda for her commitment to representing cultures, her passion for art and her service to others.”

“Threads and our international family feel full of possibility and ready to learn and be transformed,” Kingery said.

Kingery’s own artwork has been displayed in many private, corporate and public collections around the world and is part of numerous permanent collections. In 2007, she was appointed by President George W. Bush to the board of trustees of the Institute of American Indian and Alaska Native Culture and Arts Development in Santa Fe, New Mexico. She was named Dynamic Woman of the Year for the Chickasaw Nation in 2017. Several Kingery-inspired paintings are included in the “Visual Voices: Contemporary Chickasaw Art” exhibit. The show opened Aug. 16 at the famed Santa Fe Indian Market, the nation’s pre-eminent Native American art show, celebrating its 98th anniversary. 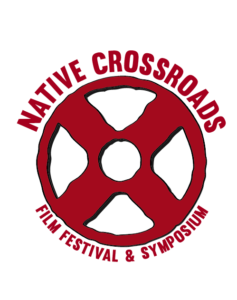 Native Crossroads Film Festival Turns Its Gaze to the Future 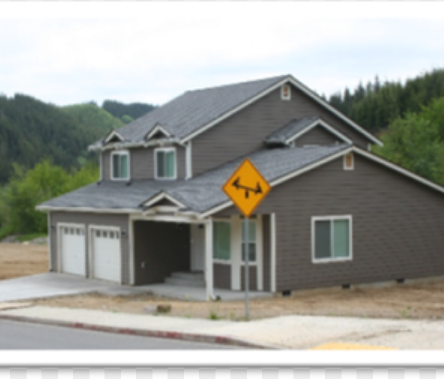 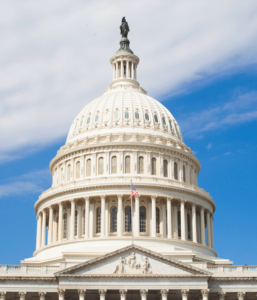