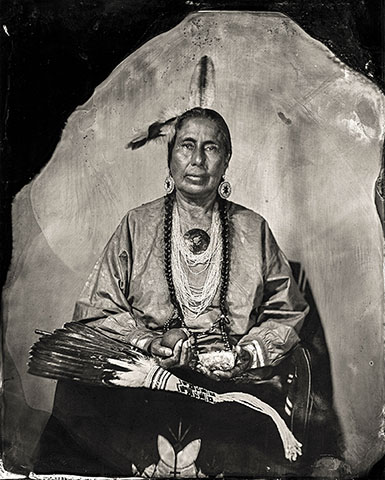 NEW HAVEN, Conn. — The Yale University Art Gallery is pleased to announce the opening of Place, Nations, Generations, Beings: 200 Years of Indigenous North American Art, the museum’s first major exhibition of Indigenous North American art. Curated by Yale University graduates Katherine Nova McCleary (Little Shell Chippewa–Cree), B.A. 2018, and Leah Tamar Shrestinian, B.A. 2018, with Joseph Zordan (Bad River Ojibwe), B.A. 2019, the exhibition features basketry, beadwork, drawings, photography, pottery, textiles, and wood carving from the 19th century to the present day representing more than 40 Indigenous nations. It is the first exhibition to bring together Indigenous art from the collections of the Gallery, the Yale Peabody Museum of Natural History, and the Beinecke Rare Book and Manuscript Library and marks a milestone in the display and interpretation of Indigenous art on Yale’s campus. 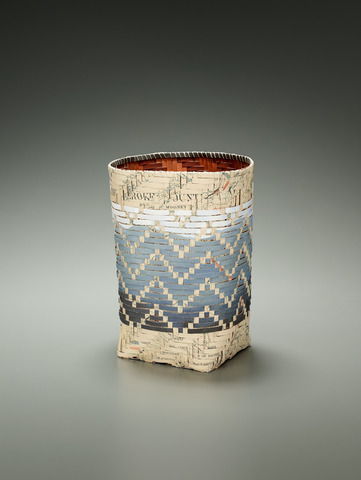 Guided by the four themes in the exhibition title, the display celebrates the diversity of the art forms while examining broad concepts that unite the objects. The first section, “Place,” considers the connections that Indigenous peoples have to their lands. Much of the art in the exhibition was collected between 1870 and 1930, a period during which Indigenous North American peoples were forced from their homes, severing their relationships with their lands and waterways. Through their designs, materials, and histories, however, the works in this section illustrate Indigenous nations’ and artists’ continued connections to place, which persist despite colonization. To make Our Lands Are Not Lines on Paper (2012), for example, Shan Goshorn (Eastern Band of Cherokee) wove together a historical settler map of Cherokee territory and a photograph of the Great Smoky Mountains, located on Cherokee lands. Seneca artist Marie Watt’s First Teachers Balance the Universe, Part I: Things That Fly (Predator) and First Teachers Balance the Universe, Part II: Things That Fly (Prey) (both 2015) show birds, a Boeing airplane, hot-air balloons, and UFOs—imagery that references places in the Pacific Northwest where Watt has lived or the town of Santa Fe, where she led sewing circles with students and community members who helped embroider the textiles.

Artists also play a vital role in the continuation of Indigenous nationhood, or sovereignty, as the “Nations” section of the exhibition demonstrates. Artists express sovereignty in many ways, such as showcasing their nation’s particular styles in their works or strengthening family and clan ties through gift giving. Others focus on representations of themselves or their community members; in the photographs on view by Will Wilson (Diné [Navajo]), for instance, sitters have the agency to choose their own poses, clothes, and even captions. Wilson then gifts the original object to the sitters and, with their permission, creates reproductions of the image.

“Generations” highlights artists’ roles as teachers, intellectuals, and innovators in the transmission of artistic forms and traditions from one generation to the next. The mother who created the 19th-century cradle in this section of the exhibition likely beaded the cradle throughout her pregnancy. A labor of love, the cradle would have allowed the child to be a part of the mother’s day—traveling on her back wherever she needed to go and, with the two back slats allowing the cradle to be propped up against a thípi (tepee) pole or a tree, watching her work. Well-known 20th-century artist Maria Martinez (P’ohwhóge Owingeh [San Ildefonso Pueblo]) learned to make pottery by observing her aunt and other Pueblo ceramists as they worked. In the 1910s, Martinez and her partner, Julian Martinez, revitalized a black-on-black pottery style, inspired by sherds of pots by Pueblo artists from the 12th to the 17th century. Martinez paved the way for other Indigenous artists to break into the mainstream fine-arts market by allowing them to watch and learn from her, as she had from her aunt.

Finally, “Beings” explores the relationships that Indigenous artists and nations have to animals, plants, and cosmological forces. The crenellated design on an Anishinaabe bandolier bag (aazhooningwa’on) from the early 20th century, for example, represents Mishipeshu (Underwater Panther), the emissary of the underworld, while the long, curving stems on the bag are adopted from an earlier pattern that invoked the powerful being Animiki (Thunderbird). Richard Hunt’s Sea Monster Mask (1999) reflects on the Kwakwaka’wakw origin story, in which ’Namxxelagayu (Sea Monster) saved the tribe’s first ancestor from floods and brought him home to start the Kwakwaka’wakw Nation. Other objects are themselves considered beings that must be cared for and that have the ability to engage with and affect those around them, as was likely the case with a feathered basket by a once-known Pomo artist from the early 20th century. 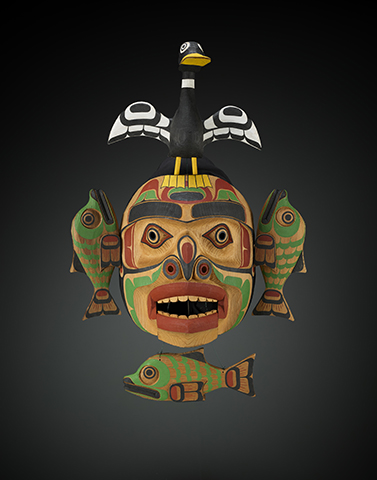 The exhibition is the culmination of three years’ work by the student curators, two of whom also participated in a Native American Arts Initiative Internship, sponsored by the Gallery and the Peabody. The internship allowed the students to spend eight weeks studying the interpretation, display, and management of Native American art at both museums and taking trips to other institutions with Indigenous collections, including the Buffalo Bill Center of the West, Cody, Wyoming; the Denver Art Museum; and the Peabody Museum of Archaeology and Ethnology at Harvard University, Cambridge, Massachusetts, and the University of Pennsylvania Museum of Archaeology and Anthropology, Philadelphia. As a result of the students’ research during their internship and the recommendations made in their final internship report, in April 2019, the Beinecke, the Gallery, the Peabody, and Yale’s Department of the History of Art convened an Advisory Council on Native Arts and Cultures. Made up of Indigenous scholars and community members, and funded by The Andrew W. Mellon Foundation, the council advised the University on a broad strategy for moving forward with a more permanent Indigenous advisory council. The students also developed a Student Advisory Group composed of graduate and undergraduate Indigenous students at Yale, who volunteered their time to provide feedback and make recommendations.

“In addition to collaborating with Indigenous scholars, activists, tribal members, and artists to create an exhibition respectful of the artists, their nations, and their artwork,” the curators of the exhibition say, “we felt it was important to emphasize the ongoing presence of Indigenous nations. To do so, we have included contemporary Indigenous work, including that of prominent artists such as Julie Buffalohead (Ponca), Robert P. Tenorio (Santo Domingo Pueblo [Kewa]), Watt, and Wilson, among others.” The textiles by Watt, newly acquired by the Gallery, are thus displayed near the opening of the exhibition to immediately draw visitors’ attention to the contemporary art in the show. “We also believed it was important for visitors to first encounter a work by an artist from a local Indigenous nation,” they continue. “We therefore chose to place a work by a Mohegan artist at each entrance to the exhibition—at one end, a bowl by Justin Scott and, at the other, a basket by a once-known Mohegan artist.” 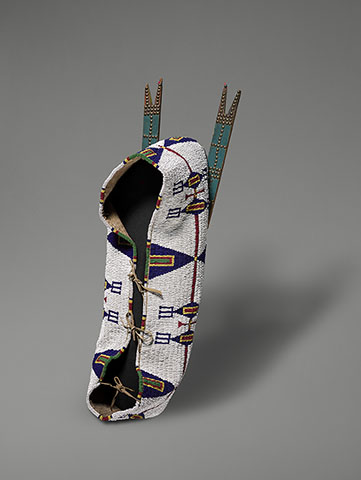 Place, Nations, Generations, Beings: 200 Years of Indigenous North American Art also fits into broader initiatives within Yale’s arts communities. Stephanie Wiles, the Henry J. Heinz II Director at the Gallery, says, “Working with the Peabody and the Beinecke was a fantastic opportunity to show Yale’s collections more widely across campus in support of interdisciplinary learning and the University’s vision for ‘one Yale.’” 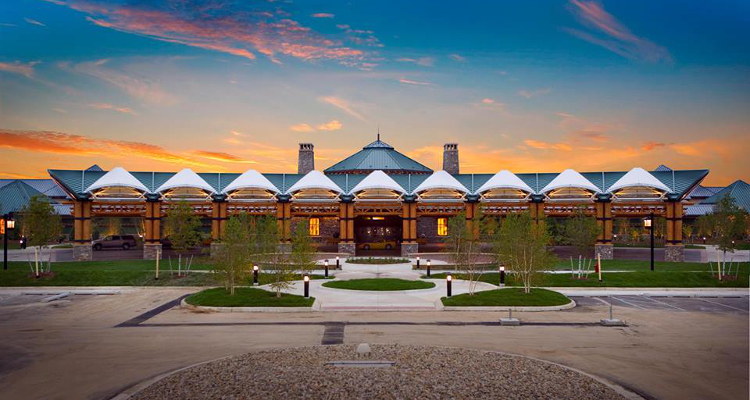 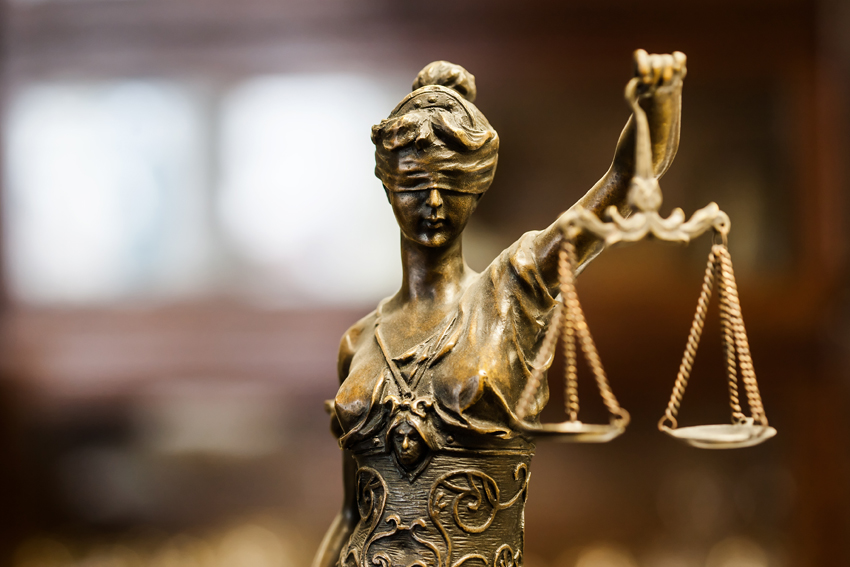 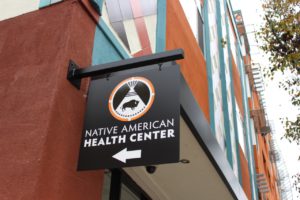 IHS Awards $7.5 Million to Urban Indian Organizations through the 4-in-1 Grant Opportunity