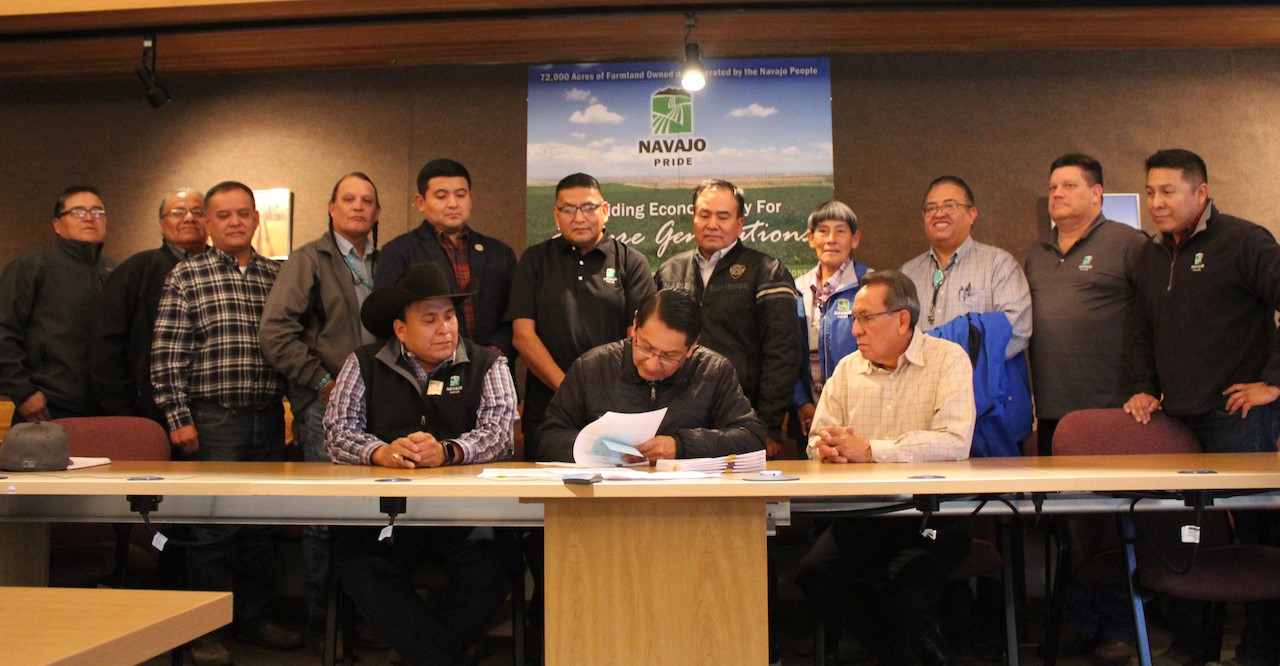 FARMINGTON N.M. — On Monday, Navajo Nation President Jonathan Nez was joined by Navajo Agricultural Products Industry Board of Directors as he signed the first-phase master agriculture lease for NAPI to continue operations on approximately 72,000 acres of Navajo land located south west of Farmington, N.M. NAPI officials said the Navajo enterprise had work toward finalizing the lease agreement for several years.

The Navajo Nation created NAPI in 1970 to operate and manage the Navajo Indian Irrigation Project, which authorized the use of over 110,000 acres of land and water resources to be used to grow agricultural products. Since then, the enterprise continues to expand and offer a wide variety of food products for sale.

“The Nez-Lizer Administration commends the NAPI Board and all of their employees for continuing the success of NAPI and the development of NIIP. The master lease process took years to develop and went through a lengthy review process before reaching this point today,” said President Nez, who signed the final lease agreement at the NAPI Headquarters.

Council Delegate Rickie Nez, who also chairs the Navajo Nation Council’s Resources and Development Committee, sponsored legislation to support the master agriculture lease, which was eventually approved by the RDC.

During Monday’s NAPI Board of Directors meeting, the group also received several reports and updates regarding the Bisti Solar Project in the community of Huerfano, a hemp pilot research project being conducted by NAPI and New Mexico State University under provisions in the 2014 U.S. Farm Bill, and the proposed development of the petrochemical plant by Four Corners Economic Development.

President Nez noted that the Nez-Lizer Administration’s Háyoołkááł Work Group supports the Bisti Solar Project, which is currently under the management of project manager Sam Woods, who provided the update to NAPI Board members. NAPI approved a resolution to support the project which will be developed on approximately 660 acres of land within the boundaries of NAPI.

In April, President Nez and Vice President Myron Lizer issued the ‪“Navajo Háyoołkááł (Sunrise) Proclamation,” which states that the Navajo Nation will pursue and prioritize renewable energy development for the long-term benefit of the Navajo people.

Also in attendance were Navajo Nation Division of Natural Resources Executive Director Dr. Rudy Shebala, Division of Economic Development Executive Director JT Willie, and Navajo-Hopi Land Commission Office Director Robert K. Black, Jr. The Nez-Lizer Administration thanks the NAPI Board of Directors and staff for the opportunity to be a part of Monday’s meeting.